David N. Dinkins, the son of a barber who became New York City’s first black mayor, died at the age of 93 last night, at his home in Manhattan at the Upper East Side, less than two months after his wife, Joyce died. His death was confirmed by mayor Bill de Blasio. 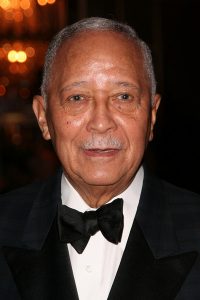 David N. Dinkins became mayor on the wings of racial harmony but he was voted out after one term in a storm of criticism over his handling of four days of racial violence in Crown Heights, Brooklyn.

As we learn from wikipedia, before entering politics, Dinkins was among the more than 20,000 Montford Point Marines (trained 1942–1949; Dinkins’ service was 1945–1946). He graduated cum-laude from Howard University, and received his law degree from Brooklyn Law School (1956). Dinkins began his political career by serving in the New York State Assembly in 1966, eventually advancing to Manhattan borough president before becoming mayor. After leaving office, Dinkins joined the faculty of Columbia University.

Early life and education
Dinkins was born in Trenton, New Jersey, the son of Sarah “Sally” Lucy and William Harvey Dinkins Jr. His mother was a domestic worker and his father a barber and real estate agent. He was raised by his father after his parents separated when he was six years old. Dinkins moved to Harlem as a child before returning to Trenton. He attended Trenton Central High School, where he graduated in 1945 in the top 10 percent of his class. Upon graduating, Dinkins attempted to enlist in the United States Marine Corps but was told that a racial quota had been filled. After traveling the Northeastern United States, he finally found a recruiting station that had not, in his words, “filled their quota for Negro Marines”; however, World War II was over before Dinkins finished boot camp. He served in the Marine Corps from July 1945 through August 1946, attaining the rank of private first class. Dinkins was among the Montford Point Marines awarded the Congressional Gold Medal by the United States Senate and House of Representatives.

Political career
While maintaining a private law practice from 1956 to 1975, Dinkins rose through the Democratic Party organization in Harlem, beginning at the Carver Democratic Club under the aegis of J. Raymond Jones. He became part of an influential group of African American politicians that included Denny Farrell, Percy Sutton, Basil Paterson, and Charles Rangel; the latter three together with Dinkins were known as the “Gang of Four”. As an investor, Dinkins was one of fifty African American investors who helped Percy Sutton found Inner City Broadcasting Corporation in 1971.

Dinkins briefly served as a member of the New York State Assembly (78th D.) in 1966. He was nominated as a Deputy Mayor by Mayor Abraham D. Beame but was ultimately not appointed. Thereafter, Dinkins served as president of the New York City Board of Elections (1972–1973) and as New York City Clerk (1975–1985). He was elected Manhattan borough president in 1985 on his third run for that office. On November 7, 1989, Dinkins was elected mayor of New York City, defeating three-term incumbent mayor Ed Koch and two others in the Democratic primary and Republican nominee Rudy Giuliani in the general election. Dinkins came to visit the Lubavitcher Rebbe, Rabbi Menachem Mendel Schneerson, seeking his blessing and endorsement.

Dinkins was elected in the wake of a corruption scandal that involved several New York City Democratic leaders. Mayor Koch, the presumptive Democratic nominee, was politically damaged by the corruption in his administration and his handling of racial issues, and among the candidates Dinkins was his greatest challenger. Additionally, the fact that Dinkins was African American helped him to avoid criticism that he was ignoring the black vote by campaigning to whites. While a large turnout of African American voters was important to his election, Dinkins campaigned throughout the city. Dinkins’ campaign manager was political consultant William Lynch Jr., who became one of his first deputy mayors.

Mayoralty
Dinkins entered office in January 1990 pledging racial healing, and famously referred to New York City’s demographic diversity as a “gorgeous mosaic”. The crime rate in New York City had risen alarmingly during the 1980s, and the rate of homicide in particular reached an all-time high of 2,245 cases during 1990, the first year of the Dinkins administration. The rates of most crimes, including all categories of violent crime, then declined during the remainder of his four-year term. That ended a 30-year upward spiral and initiated a trend of falling rates that continued and accelerated beyond his term. However, the high absolute levels, the peak early in his administration, and the only modest decline subsequently (homicide down 12% from 1990 to 1993) resulted in Dinkins’ suffering politically from the perception that crime remained out of control on his watch. Dinkins in fact initiated a hiring program that expanded the police department nearly 25%. The New York Times reported, “He obtained the State Legislature’s permission to dedicate a tax to hire thousands of police officers, and he fought to preserve a portion of that anticrime money to keep schools open into the evening, an award-winning initiative that kept tens of thousands of teenagers off the street.”

During his final days in office, Dinkins made last-minute negotiations with the sanitation workers, presumably to preserve the public status of garbage removal. Rudy Giuliani, who defeated Dinkins in the 1993 mayoral race, blamed Dinkins for a “cheap political trick” when Dinkins planned the resignation of Victor Gotbaum, Dinkins’ appointee on the board of education, thus guaranteeing Gotbaum’s replacement six months in office. Dinkins also signed a last-minute 99-year lease with the USTA National Tennis Center. By negotiating a fee for New York City based on the event’s gross income, the Dinkins administration made a deal with the US Open that brings more economic benefit to the City of New York each year than the New York Yankees, New York Mets, New York Knicks, and New York Rangers combined. The city’s revenue-producing events Fashion Week, Restaurant Week, and Broadway on Broadway were all created under Dinkins.

Dinkins’s term was marked by polarizing events such as the Family Red Apple boycott, a boycott of a Korean-owned grocery in Flatbush, Brooklyn, and the 1991 Crown Heights riot. When Lemrick Nelson was acquitted of murdering Yankel Rosenbaum during the Crown Heights riots, Dinkins said, “I have no doubt that in this case the criminal-justice system has operated fairly and openly.”Later he wrote in his memoirs, “I continue to fail to understand that verdict.”

In 1991, when “Iraqi Scud missiles were falling” in Israel and the Mayor’s press secretary said “security would be tight and gas masks would be provided for the contingent”, Mayor Dinkins visited Israel as a sign of support.

Later career
Dinkins joined the Columbia University School of International and Public Affairs as a professor of professional practice in 1994; and up until his death in November 2020, he was a full-time faculty member.

Dinkins was a member of the board of directors of the United States Tennis Association and a member of the Jazz Foundation of America. He served on the boards of the New York City Global Partners, the Children’s Health Fund, the Association to Benefit Children, and the Nelson Mandela Children’s Fund. Dinkins was also on the advisory board of Independent News & Media and the Black Leadership Forum, was a member of the Council on Foreign Relations, and served as chairman emeritus of the board of directors of the National Black Leadership Commission on AIDS.

Dinkins’ radio program Dialogue with Dinkins aired on WLIB radio in New York City from 1994 to 2014. His memoirs, A Mayor’s Life: Governing New York’s Gorgeous Mosaic, written with Peter Knobler, were published in 2013.

Although he never attempted a political comeback, Dinkins remained somewhat active in politics after his mayorship, and his endorsements of various candidates, including Mark J. Green in the 2001 mayoral race, were well-publicized. He supported Democrats Fernando Ferrer in the 2005 New York mayoral election, Bill Thompson in 2009, and Bill de Blasio in 2013. During the 2004 Democratic presidential primaries, Dinkins endorsed and actively campaigned for Wesley Clark. In the campaign for the 2008 Democratic presidential nomination, Dinkins served as an elected delegate from New York for Hillary Clinton. During the 2020 Democratic presidential primaries, Dinkins endorsed former Mayor Michael Bloomberg for president on February 25, 2020, just before a Democratic debate.

Dinkins sat on the board of directors and in 2013 was on the Honorary Founders Board of The Jazz Foundation of America. He worked with that organization to save the homes and lives of America’s elderly jazz and blues musicians, including musicians who survived Hurricane Katrina. He served on the boards of the Children’s Health Fund (CHF), the Association to Benefit Children, and the Nelson Mandela Children’s Fund (NMCF). Dinkins was also chairman emeritus of the board of directors of the National Black Leadership Commission on AIDS.[35] He was a champion of college access, serving on the Posse Foundation National Board of Directors until his death in 2020.

Next US secretary of state Antony Blinken – Things to know (VIDEOS)