The White House announced that there no risk for Donald Trump or Vice President Mike Pence. It’s unclear when O’Brien last met with President Trump. Their last public appearance together was over two weeks ago on July 10, during a visit to US Southern Command in Miami . 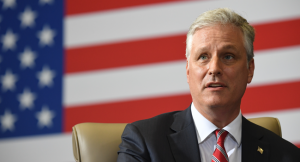 White House officials did not respond to questions about the last time president Trump and Robert O’Brien had contact, but the White House insisted that:

“There is no risk of exposure to the President or the Vice President” and that the “work of the National Security Council continues uninterrupted.”

At the same time, according to an unnamed statement to the press from the White House:

“O’Brien is experiencing “mild symptoms” and is self-isolating and working from a secure location off site,”

Robert O’Brien was accompanied 10 days ago on a trip to Europe by Secret Service agents, staffers and multiple reporters. Pictures below released from the aforementioned trip to Europe, shows Robert O’Brien practicing no social distancing nor wearing a mask.

Great press engagement with a few of Europe’s top journalists. We talked about a range of critical national security topics, including #China, #HongKong, #5G security, #Afghanistan, and our force posture in #Europe. pic.twitter.com/RNGkPGdslH

Chevron Agrees to $5 to $13b. Takeover of Noble Energy (VIDEOS)