ROCHESTER, NY — Two young adults,  a man and a woman (18 and 22 years old)  been killed and 14 wounded today, Saturday September 19th, after a Mass shooting at a house party.

The Rochester Mass shooting occurred on the 200 block of Pennsylvania Avenue, at a residence located in the city’s Marketview Heights neighborhood.

The wounded were taken to Strong Memorial and Rochester General hospitals. Two others suffered injuries while fleeing the gunfire.

Police in the city of Rochester said, that they arrived to find around 100 people running down the street.

“This is truly a tragedy of epic proportions,”

No suspects have been arrested over today’s shooting and no motive has been identified.

“the two victims, a man and a woman who have not been named, were aged between 18 and 22. None of the 14 others who were shot suffered life-threatening injuries…

“This is yet another tragedy where individuals are having these illegal and unsanctioned house parties taking place in these properties,” the chief said. He said these are unsafe because of the COVID-19 outbreak, and when “you add in alcohol and violence … it just becomes a recipe for disaster.”

“This tragic act of violence has impacted many people’s lives and families. I’m begging everyone to remain calm and exercise deep restraint as RPD investigates what happened here and seeks those responsible.” 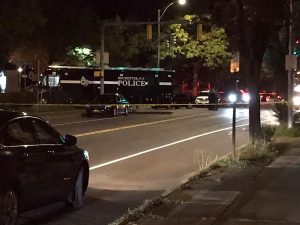 The city’s police have been under increasing pressure over the death of Daniel Prude, a black man who was hooded and restrained during an arrest.

He died in March, but the case only became public earlier this month. Rochester police chief La’Ron Singletary has since stepped down, saying that his handling of the case was being distorted. Seven officers have also been suspended.

Mary Trump Vs. President and his Family, Claiming Fraud of Millions (Document)