President Trump’s doctor insisted today that he is doing “very well” as he is treated for coronavirus at Walter Reed National Military Medical Center.. On the other hand, Navy Commander Dr. Sean Conley and other doctors, raised more questions than they answered at a briefing, leaving unclear whether the president has ever required supplemental oxygen.

Conley’s assessment was contradicted by an account provided by a person familiar with Trump’s condition, who said some of his vital signs over the past 24 hours were “very concerning” and that the next 48 hours will be critical in terms of his care. The person was not authorized to speak publicly and spoke to The Associated Press on condition of anonymity.

Navy Commander Dr. Sean Conley, as he updated the nation on the president’s condition from Walter Reed Medical Center, said that the President has been fever-free for 24 hours . 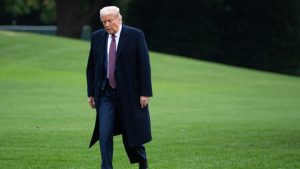 “Thursday no oxygen. None at this moment. And yesterday with the team, while we were all here, he was not on oxygen. President’s symptoms, including a cough and nasal congestion are now resolving and improving.”