The Justice Department announced an indictment against two British citizens El Shafee Elsheikh (Arab British) and Alexanda Kotey (British – Greek Cypriot  and Ghana- Photo below) accused of being part of an ISIS cell that beheaded Western hostages, including Americans. 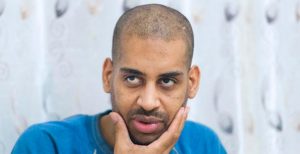 The aforementioned members of the ISIS cell known as “The Beatles,” were charged with eight criminal counts, including conspiracy to conspiracy to murder U.S. citizens, commit hostage taking,  and conspiracy to provide material support to terrorists. Their charges relate to the deaths of four Americans in Syria: Kayla Mueller, Peter Kassig, James Foley and  Steven Sotloff. “The Beatles” were a four-member ISIS cell named so by their prisoners because of their British accents. The terrorists were captured by Kurdish forces in Syria in 2018 and were transferred to U.S. military custody in Iraq in 2019.

“The families of the victims have suffered the painful loss of their loved ones at the hands of brutal killers… While their pain may never subside, today, with the announcement of this indictment, we’re beginning to bring them the justice they deserve.”

The men are scheduled to make their initial appearance in federal court in Alexandria, Va., next Wednesday. Zachary Terwilliger, U.S. attorney for the Eastern District of Virginia, said:

“At that hearing, they will be informed of the charges against them. They will be provided with counsel if they cannot afford it. They will receive medical care and be housed in a sanitary facility and be provided with three meals a day, all coupled with the due process of law. All things denied to James, Kayla, Steven and Peter and the other British and Japanese victims named in the indictment,” .

The ability of the U.S. to bring charges and extradite the ISIS members was delayed for years, resting on key evidence gathered by U.K. authorities that was blocked by a British court from being shared with American authorities over concerns that U.S. justice officials not pursue the death penalty against the alleged terrorists.

The U.K. abolished the death penalty in the 1960s.

Attorney General William Barr wrote to the U.K.’s Home Secretary Priti Patel in August that the U.S. would not seek the death penalty in its pursuit of charges against the two British men and Justice Department officials on Wednesday reiterated that promise. Assistant Attorney General for National Security John C. Demers said.

“The attorney general made that clear in his letters to the Home Secretary that he decided, on balance, that we would not be pursuing the death penalty in this case and that’s where we are,”

Source of Information: – The Hill -tothemaonline-