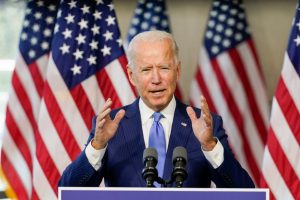 “China respected the choice of the American people. We congratulate Mr. Biden and Ms. Harris”

Chinese Foreign Ministry spokesman gave no reason for the delay but he said:

“At the same time, we understand that the outcome of this US election will be ascertained in accordance with US laws and procedures,”

Wang said on Monday that they had “noted” Biden’s declaration of victory. “We will handle the issue of the statement (of congratulations) in accordance with international practice,”.