Home International News NASA Discovered Evidence of Life on Mars 40 Years Ago, Then Set It On Fire

NASA Discovered Evidence of Life on Mars 40 Years Ago, Then Set It On Fire

“In 1976 America’s Viking 2 lander touched down on Mars and took the first close-up, color photographs of the red planet’s surface”

NASA Discovered Evidence of Life on Mars 40 Years Ago, Then Set It On Fire

“In the late 70s, two Viking robots sailed to Mars, pillaged the soil and burnt any traces of life they found.

That was never the plan, of course. When NASA first landed the twin spacecraft named Viking 1 and Viking 2 on the surface of Mars 40 years ago, scientists were ecstatic to finally start studying Martian soil for signs of organic (carbon-based) molecules that could prove the Red Planet was hospitable for life. It should’ve been a slam-dunk mission. The pockmarked face of Mars was constantly being pelted with tiny, carbon-rich meteorites, after all — detecting signs of that carbon was thought to have been a sure thing.” 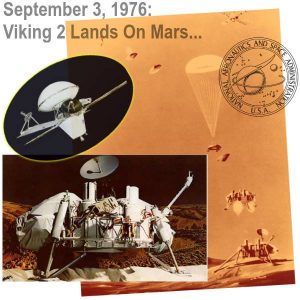 About the Photo: “Viking 2 Image of Mars Utopian Plain: 1976 – September 3, 1976: The boulder-strewn field of red rocks reaches to the horizon nearly two miles from Viking 2 on Mars’ Utopian Plain. Scientists believe the colors of the Martian surface and sky in this photo represent their true colors. Fine particles of red dust have settled on spacecraft surfaces. The salmon color of the sky is caused by dust particles suspended in the atmosphere. Color calibration charts for the cameras are mounted at three locations on the spacecraft. Note the blue star field and red stripes of the flag. The circular structure at top is the high-gain antenna, pointed toward Earth. Viking 2 landed September 3, 1976, some 4600 miles from its twin, Viking 1, which touched down on July 20.”

Macedonian Greeks went to China during 2nd Century BC?